If you've shopped on our website or seen our products at stores, you've probably noticed a cute drawing of a llama on the lid and on the quinoa cup. Here is a bit of the background of "Kliff the Llama" and why we are so Keen around here on Llamas!
Llamas are awesome. They are large gentle giants that are very smart and strong. In Bolivia and many parts of the world, they are beloved bc of their multi-use abilities. They are workers, protectors, and provide nourishment to many cultures. In the Altiplano of Bolivia, Llamas are used like oxen are in North America. They pull large plows and other agriculture mechanisms to help farmers plant their quinoa and maintain the crops. Llamas also have a great ear and can sense danger from hundreds of yards away. When alerted, llamas let out a large clicking sound to not only warn other llamas but also can generally scare off most predators. Llamas have been known to go toe to toe with many would-be attackers and fend off their groups from the likes of fox, coyotes and even bears! 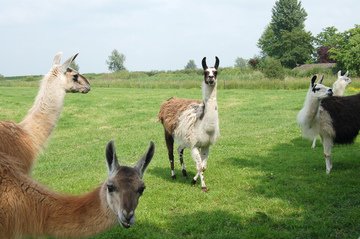 Our founder Christopher, learned about the intricacies of llamas during his first quinoa sourcing trip to Bolivia in 2011. Coming face to face with a massive llama on the "Isla del Sol", he was slightly terrified and awestruck when the hurling llama came charging to a stop just feet from him. This Llama was marking his area which consisted of a village community in which she was keeping safe from outsiders. Especially the unusually tall fair-skinned bearded man intruding the village. The villagers across South America show their gratitude for many llamas, by dressing them with ornate beads, streamers, and cloths. This can be seen all over and even loudly celebrated during festivals like Carnival and others throughout the year.
Llama "guano" and its urine is also highly valuable for farmers. The urine is a natural pesticide and the guano is used as fertilizer. Llamas are also a large protein/meat source in these areas where not much else grows or can be raised as livestock. This animal is truly a prized possession and is some of the most interesting animals to be around. In 2013, the Keen One team went to Silverton, CO, and trekked with two llamas for eight days handing out our latest Keen One Quinoa pouches and enjoying the nature and beauty of the San Juans. The two llamas, Greyhawk and Cimeron, were two of the most gentle giants we had ever encountered. They even were very attentive to Jim's guitar at night in which they perched up their ears to the lovely tunes and listened until he stopped.
The name "Kliff" comes from a mix of the high plateau mountainous areas in which they like to roam along with that of a close family member. During this time, Christopher just had his first nephew born who was named Cliff. Hence, we change the first letter to a K to keep "On Brand" with Keen One Quinoa! Kliff has been an intricate part of Keen One ever since and can be found on every cup and even our top label!
Back to blog